Went out for a short ride last night. Battled some good crosswinds and interstate traffic. The SECA gets tossed around pretty good but it also recovers from blasts easily. I had to get into a full tuck at a few points to minimize the effects and it seemed to help.

The air was chilly but my hi-viz jacket (TourMaster Transition 2) did great. I'll have to post a pic of it but be warned it's bright enough to see from space. Which means, drivers still won't see me but they'll end up with a spot in their vision like when you stare at the sun. My boots should be here today (Joe Rocket Sonic WP) and my pants (AGV Telluride) will arrive some time in the future. I'll try to post a few reviews if I get the chance.
Posted by red at 7:19 AM 4 comments:

I picked up my bike last night.

It's a big change from the 76 CB750 I was riding off and on last year. Very light (450lbs curb) and pretty thin. You had to really make the CB lean, this leans over very easily. I'm slowly building up my confidence again and my situational awareness. I screwed up a couple of turns, ended up taking them wide and slow. The skills will come with time and practice.

All in all, I really like the bike. I'm adjusting to the foot position, it's slightly farther back than "standard". 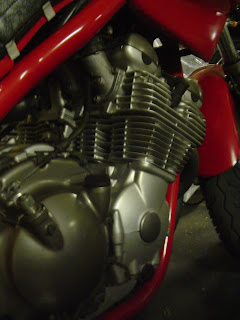 I extended the Battery Tender leads and routed through the back rest hole in the seat. 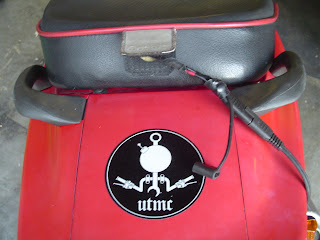 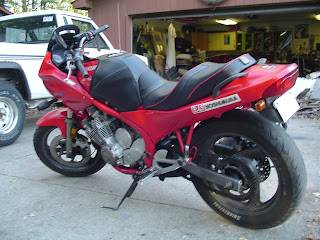 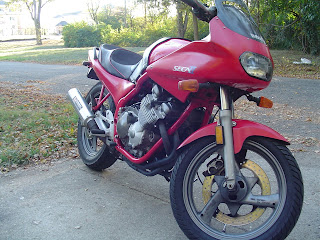 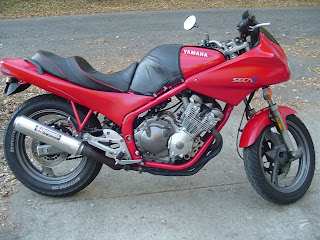 Well, still waiting on the dough but I set up some test rides today. On the schedule was the 1993 750 Honda Nighthawk and the 1993 Yamaha SECA II. After waiting for call backs to confirm, we decided to set out and try to blindly find the Ducati Dealership.

About 2 hours later (we eventually found the dealership) the owner of the Yamaha called so we swung the car around and headed north. Not 5 minutes after the guy called, the owner of the Nighthawk called. He apologized for taking so long to call me back. Before I called, two guys showed up and bought the 'hawk. "No worries, congrats on the sale." I told him.

Fast-forward 45 minutes, we arrive at the SECA II. Visually, it's in good shape for a 93. The front brakes are out due to pads (the owner says he ordered them, just hasn't got them yet)and the shifter linkage is a bit loose. No leaks, oil smelled fine, chain and sprockets are good. Some minor scratching on the engine cases from a drop or two. Nothing broken though. The engine wasn't completely cold but it started right up and ran well. No valve chatter, no smoke.

Throw on the gear and hop on for a test ride. Man, this bike is narrow and light compared to ye olde CB750 SOHC. The throttle has a sharper power curve too. Out tooling around trying to get comfy, the posture is good but I'm not used to the foot peg position. It rides, runs and shifts great. No flat spots or stumbling problems. After opening it up a bit, the smile begins. I like this bike.

I pull in and tell the guy I have a few more to look at and I'll call him in the middle of the week and see if he still has it. (Try to hide the excitement) So, we'll see if it's still for sale. Next comes the barter. He's asking $1400, down from the original price of $1700. I'm going to offer $1200 and go from there. I'd pay his asking price but that's not how this works.