A few years ago, a friend purchased his first bike, a 1981 Suzuki GS650GL.  It's your average UJM in cruiser dress, sporting an inline 4 with shaft drive.  Shortly after he bought it, he couldn't get it started.  While digging into the cause, we found a lot of half-assed "work" by the previous owner (spit).  He decided to tear down the carbs and give it a good once over. This being his first dive into all things mechanical, it had a bumpy start, followed by some progress, then nothing.  His free time decreased until the little Suzuki sat in my garage, rotting away.

Flash forward, his wife is due in 3 weeks and the little 'Zuki was still hibernating in the garage at my old house.  I offered to get it back on the road but in exchange I could ride it until his life gets back to a point where he can start riding again.  With the deal accepted, it was time to free the bike from it's cocoon and move it to my new garage. 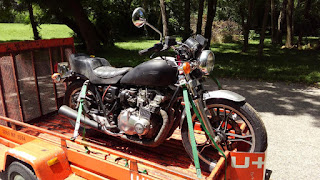 Under the cruiser guise sits potential for a fun bike! 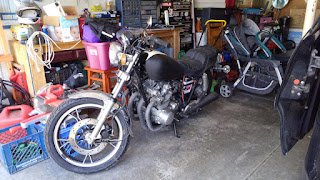 Not as much room as my last garage but the space is better. Sometimes, less is more. 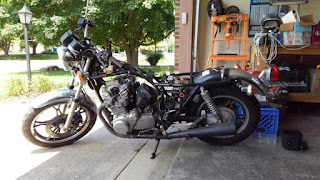 Within the hour, I had the tank pulled and drained, the carbs pulled and bowls off. 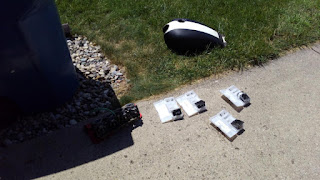 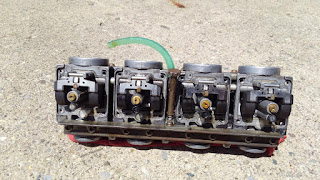 Not too bad for a bike that hasn't run in about 2 years.

Since I don't own the bike, I can't make any permanent mods.  I plan on adding taller rear shocks, dropping the triple down about an inch, replacing the bars and fabing my own seat and mounts for a top case.