Look out!  There's a new project in town.

My garage now houses a 1987 Honda CBR600F Hurricane.  I purchased it from my cousin's boyfriend who bought it last year as a first bike and project.  Having no tools, no time and no place to keep it, he finally gave in and sold it to me for what he paid.  I figured, it's cheap, has potential and already lives in my garage, so why not!

It's had a hard life, passed from owner to owner, subjected to abuse and neglect.  There isn't a single piece of plastic on her and all the lighting is gone or broken.  Thankfully, the wiring harness appears to be intact.  It needs a good once over, including a valve check (thankfully, they are screw/nut adjusters).  I have no timeline for having her on the road, as this is definitely a back burner project. 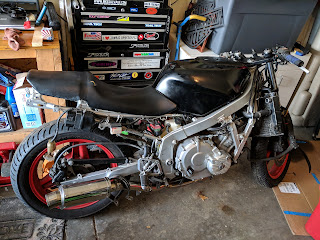 I see some ratty potential! 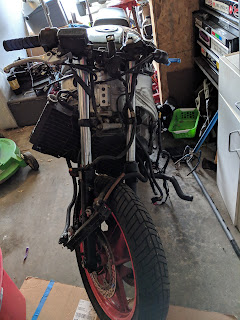 The radiator and oil cooler will need some new mounts fabbed up
since there will be no subframe used. 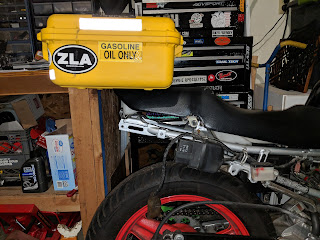 Getting ideas on fabing a mount. 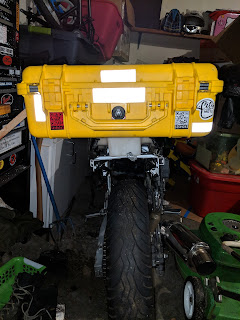 Future home of an oval LED tail/brake light and some blinkers.


For gauges, I'll probably go with an Acewell all-in-one unit and make a box for the power outlets and other various warning lights. Another option is the Vapor from TrailTech but I like the aesthetics of the Acewell.  I learned my lesson on the XJ, if I use an LED backed gauge, the backlight feed is going on a dimmer so I'm not blind at night.

It feels damn good to have a bike again, even if it's a long term project.
Posted by red at 2:25 PM No comments: