Getting a little closer every week!

I have the heated grip elements and new grips installed, as well as a shiny new clutch lever and functional front brakes! The ProGrip 714s should tame some of the engines buzz through the bars. 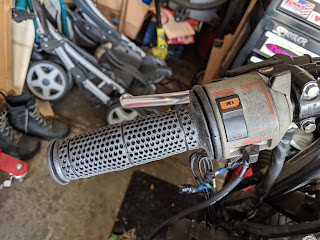 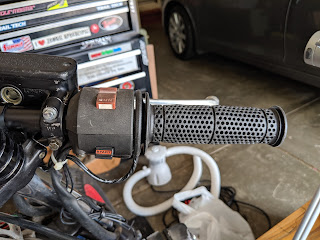 Before I could go any farther on reassembly, I needed to do the valve service.  I pulled the radiator, dropped the newly positioned oil cooler and removed the plug wires.  Once the area was cleared, I could easily get to the valve cover and remove the bolts.  My excitement quickly turned to frustration when I learned the valve adjuster tool I ordered was not even close to the correct one.  I even tried the valve adjuster from when I had a Honda Element, sadly, while the socket was the correct size, the tool itself was too large.   This stopped me dead in my tracks.  I stuffed shop towels in the plug holes and put the valve cover back on.

Some brief Googling turned up that the original tool is worth a good amount.  I found some crafty souls had ground down the sides of sockets so they could hold it with a wrench and put a screwdriver down the middle.  Someone else welded a handle on to a socket.  That's it!  With a quick message I had a friend willing to make my custom valve tool. 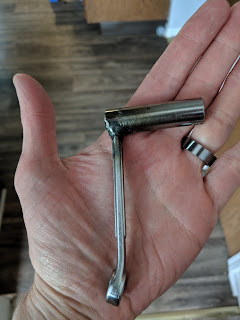 It's not perfect but it doesn't have to stand up to a high torque value, just the locknuts on the valve adjusters.  I won't have more garage time for another week or so but I should be able to knock out the valve service quickly and get on to installing the carbs and etc.