Thanks to the BMV's inaccurate calculator on their website, I know have enough spare cash to order my filters! The site said my plates would cost $95, but they were only $70. So, I placed an order with Competitive Edge in Cali for two 57mm 5inch filters and a can of aersol oil spray. I know the Unis are supposed to be crappy and have a short life but it's all I can afford right now.

No garage time this week but maybe next weekend. RedQueen and I are headed to Nashville to do some lazy car camping with her family. It should be an adventure, the pup's never been on a long road trip before. I'll try to post some pics when we get back.

In moto news, I decided to not use my old airbox covers. Instead, I'm going to get 2 number plates (sporting the number 13) to cover my filters. I still need a set of tires but those might wait until spring. I doubt I'll get much road time this year and the present set is good enough for tooling around short distances. I have a lot of mods I'd like to do over the winter if we get Frankencycle running before then. Future plans include:

That's all I can think of with standing infront it and letting my imagination run wild. Man, I'm still giddy from my ride on Sunday. One day I'll be giddy from riding my own bike! When it runs, I'll post a video as proof.
Posted by red at 12:50 PM 1 comment:

Yesterday the RedQueen, Funkz, Ruby and I went to Mike's place. It was great! He had 4 XR100s running and his CL360. His friend Jerry spent sometime with RQ teaching her the basics of clutch work and controls. She did great, much better than my first time on a bike when I was a kid. Next time, she'll be ready for more actual ride time. While she was getting instruction, we ripped around on the XRs, then brought out the ATV. The RedQueen and I hopped on the quad and followed everyone around the trails back in the woods, then played on the flattrack. It was too wet to ride the track so we just cruised around the outer edge.

After some dirt riding, we headed back and Mike let me ride the 360. It was good to get a bit of street time in. It's all straight country roads around there, which is good because I need the practice. It even started to rain a bit but I cruised on. I went a couple of miles out then decided to head back. The bike almost stalled on take off (carbs need a good cleaning) but I recovered and eventually made it up to 5th, cruising around 65mph with plenty of throttle left. It gave me a good idea of how my bike is going to feel. The high pipes didn't seem to effect the ride, so I'm pondering keeping mine. More on the 450 later.

Once the rain blew over, we got out the AK and 9mm carbine. Everyone took some shots with the AK, even RQ. She had quite the day of firts! First time riding, first time shooting a rifle. We cranked out enough rounds to make the foregrip start smoking. The title of this post is a bit of lie, no shotguns were fired but there were shells on the ground. We're definitly looking forward to heading up there again sometime soon.

We browsed his massive bike collection and drooled over it all. He has a ton of dirt bikes, a 72 Norton, BSA, 2x RD400s, a Kawasaki Triple, 2x Dreams and a lot of newer bikes. Even a couple of road racers, flat track bikes and a trials bike. Motorcycle heaven....

The brief ride on the 360 made me itch to hit the shop and get wrenching. But time is still slim and tough to juggle. I still have to get air filters, fine tune the timing and check the carb set up. Mike and I talked about having a wrenching party some day and see if we can get the Frankencycle finally running. I want the K&N filters but I'm going to settle for Uni's because I can afford them. I also told him to keep an eye out for something for RQ. She wants a bike and I'd love to surprise her with one for Christmas but we'll see. He also has a Yamaha SRX that's just sitting. I had to mention that if he wants to part with it to let me know. It's stripped down for racing but it wouldn't take much to get it road worthy. I have Surly to thank for planting the seed of interest in the SRX. Next time I'm there, I'll be sure to see if I can take it for a spin.

Atleast I got to ride on the street once this year on something close to my bike. But it only made the sickness worse...
Posted by red at 2:04 PM No comments:

I've had a big interest in FlatTrack for the last year or two. Finally I got to check out a local race and it was a blast!

On Saturday, we went to Indianapolis National Speedway to watch the races. It was amazing, I had never seen Speedway bikes before. I didn't even know Jawa was still in business! My Mom's friend Mike happens to be a 500cc class racer. He finished 3rd in the heat and 4th in the final. Not too bad. For $10 we watched 4 hours of racing. Everything from tiny 50cc quads to the incredibly agile and fast speedway bikes. Just pure throttle, balance and nerves of steel. If anyone is within driving distance and wants to check them out let me know. I think we're going back on Sept 16th.

This Sunday, we're heading to Mike's house to ride the wooded trails and hopefully his small flat track. It will be my fiance's first time on a bike but I think she'll pick it up pretty quick. I'm itching to get on his track back and see if I can work up the nerve to throw the lean. Probably not but it will still be fun.

Now if I could only find people to bring back Board Track using spookytooth cycles!
Posted by red at 9:32 AM No comments:

frame to bench, bench to frame

My buddy and I got the cam timing set and the engine installed on Sunday. We have the dyna timed but I didn't make any "micro" adjustments to it though. We'll be diving further into that this weekend if I get a chance to do some wrenching. Maybe even get the tank, carbs and all put back on. If we're lucky, perhaps a test start!

I need to ditch my stock pipes and get a 2 into 1. That should cut atleast 25lbs off my bike. Every little bit will help. I know I lost a couple of pounds when I swapped the rear suspension. But I gained about 5 with the epoxy coating in the tank, it's pretty thick up front! Not really sure what else I can do to cut down on weight. I want to keep my fenders but maybe trim them up a bit. The seat needs to be chopped down to a more sleek shape. I'd like to add a Lucas style taillight as well. Maybe some smaller signals as too.

Saturday night is another flat-trak race. We might check it out. My Mom has been hanging out with one of the racers. He's pretty cool and has a ton of bikes. I've always loved flat-track but not as much as board track. Too bad we can't gather a ton of people with SpookyTooth bikes and make our own board track racing! Anywho... 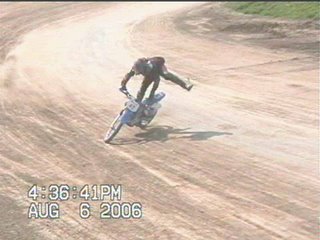 In 4wheel news, a freeze plug on my truck began leaking Friday night. I limped it back home (only about 1 mile away from home) and called my roadside assistance. The truck got towed to the dealership on Sunday and I was without wheels. Now, if I had my bike, this wouldn't be a concern. So, $260 later, I have my truck back. I know the mechanic at the dealership, so I know he didn't screw me on labor. I found horror stories online of people paying much more than $260 to fix a plug.
Posted by red at 9:46 AM No comments: