The swingarm bolt on was missing the rubber caps, or maybe this bike never had them? My XJ had a set, so I wanted to cover up the holes.  So, a few quick measurements, load up the TPU filament and a few hours later, I have a pair of plugs! 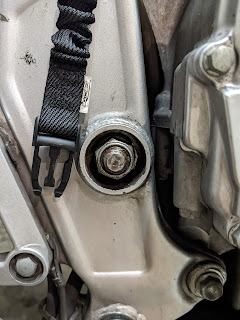 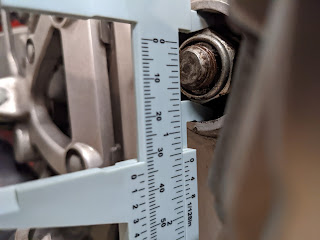 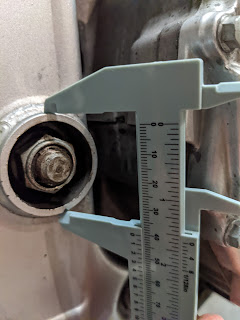 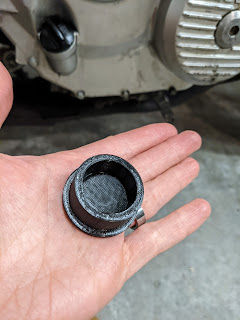 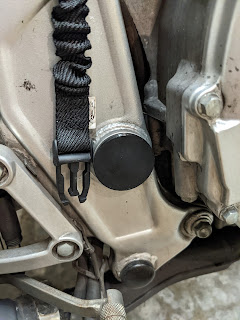 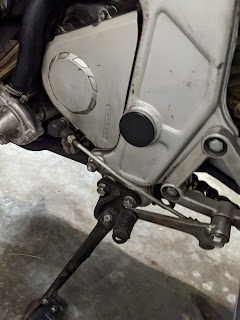 The moto-gods smiled upon me yesterday, and I was blessed with early arrival of both my OEM exhaust, and the new exhaust gaskets.  I managed to squeeze in time over lunch to hit the trouble spots with a wire wheel to remove rust and general gunk.  Then it was time for paint, or rather "ceramic coating", from Rust-oleum. 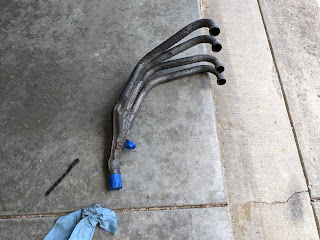 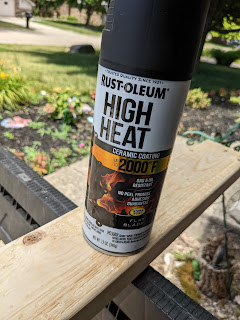 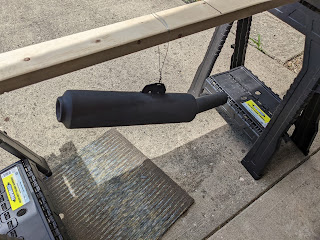 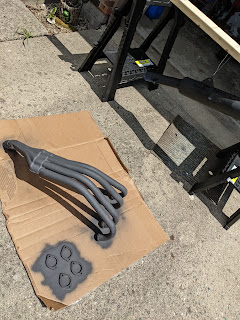 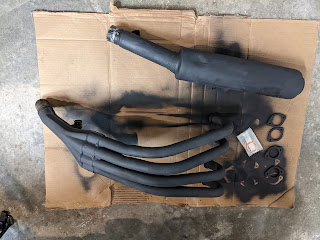 My awesome wife also blessed me with some additional garage time, so with the exhaust drying for a few hours after its second coat, I was able to rejet the carbs back to factory spec and remove the Delkevic exhaust. So, now, besides the K&N filter, the bike is back to stock from a fuel/air perspective.  The Delkevic system is going on eBay, so I can try and recoup some of my funds that were spent on the OEM system. 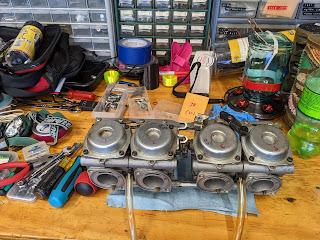 These carbs have had too much time on the bench, time to get in the game. I was torn on setting the mixture back to 2.25 turns vs 2.5, but in the end, I went with what the factory manual states, 2.25.  We'll see how it goes.
Today is the big day! First is to "cure" the exhaust coating with a series of heat cycles.  Once complete, it will be time to take it out on a 30 min ride for final curing; which nicely doubles as a test ride! If all goes well, I'll be doing shake down runs this weekend and through next week.  Might actually get real riding time in this year!
Stay safe out there.

The tires on the Hurricane were over 5 years old, showed some sidewall cracking, and the rear was suspiciously bald in the middle.  So, I ordered a set of Bridgestone Battalax BT46 last year and they sat on a shelf until today.  I've helped change tires once before but it's not my strong suit, nor do I have the tools. I built a PC for K, so he changed my tires.  It would have taken me all night, and into the next, to get this done.  He knocks it out in under an hour.  Both wheels balanced easy, quality wheels and tires.  Took them out on a brief ride today, just have to keep in mind that they're new!  They need some scrubbing and heat cycles. 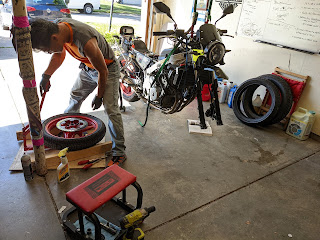 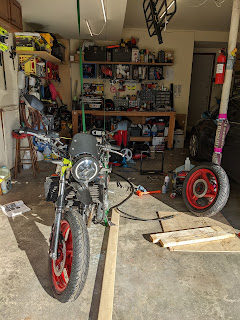 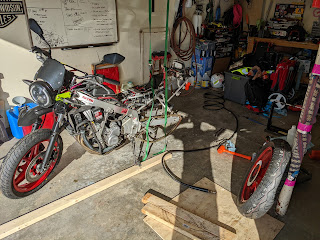 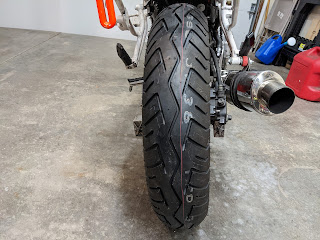 Project CBR600F: Getting back to how things used to be.

The 120s aren't really much better.  I rode to work on Friday, rode over lunch, and took the long way home.  The drone of the exhaust gave me a headache, somehow resonating inside my helmet, even with ear plugs.  This project is no different than those in the past... You hit a point and a little voice says, "Just stop.  Shove this piece of shit into the shed, let the mice move in, and buy a new bike.".

I decided to humor that voice, and checked out what CycleTrader had.  Found a nice XB12X Ulysses about 5 hours away, good price, low mileage but logistically, difficult.  Then, I remembered the Royal Enfield Himalayan and checked our local dealership, who had 3 in stock.  And, they had a Ural Tourist for a great price.   I borrowed a buddy's Gear Up 5 years ago, and absolutely loved it.  My oldest remembers it fondly and often asks when I'm going to get one.  With Saturday booked taking my youngest to a birthday party, I squeezed in time to check out the Ural.  I decided that if they still had it, I was going to put money down and just be done with the CBR for awhile.  All the while, with a backup plan in my head about an OEM exhaust system on eBay that should make this whole jetting situation much easier by returning to stock config.  (Keep in mind, I didn't chose this loud ass exhaust system.)

The Ural was sold, so I eyed the Royal Enfield.  I like the looks of the Himalayan and it's totally a bike I would ride, but I just couldn't justify the added debt.  I pulled out my phone, and bought the OEM exhaust.  It's crusty and will need media blasted and painted, but I'll take that over jetting.  The exhaust and gaskets should be here by the end of the month.  Until then, I'll keep riding here and there; as the low-mid range jetting isn't terrible.

Stay safe out there.

After a few different attempts at used cables, and random "Honda" cables from a certain retailer named after a large river, I broke down and ordered custom cables from Motion Pro.  I measured, measured again, and then a third time; then placed the order.  It took about 3 weeks to get them to the tune of about $140.  Totally worth it, they fit perfectly!

It took a few attempts to figure out the appropriate routing to avoid binding but eventually I found the best path.  Then, had to pull the cables to lube them.  I used a trick from MC Garage:

This worked perfectly! I used some high end Dupont Dry Film lubricant that I use on my 3d printers. 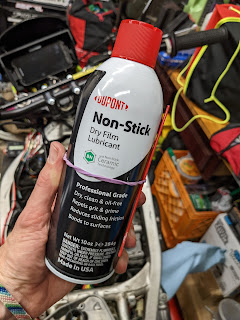 The routing was definitely a challenge since it's a bit of a mess behind the "gauge" cluster. 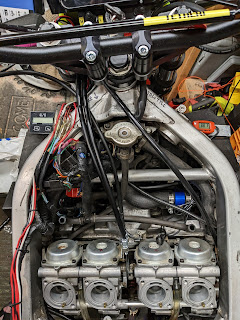 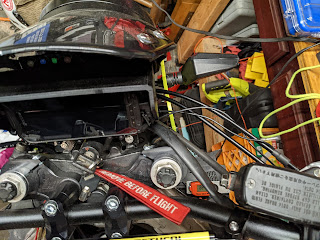 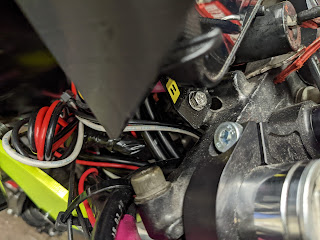 Next is fresh fuel and some test rides to see if the 120 Mains are big enough.  I'm guessing they won't be but I should have enough larger Main sizes to get this narrowed down. Then it's on to the next step of the CV tuning guide http://www.factorypro.com/tech/tech_tuning_procedures/tuning_carbtune,CV,high_rpm_engines.html
Stay safe out there.

Project CBR600F: The Secrets of the Circuits

The Hurricane is still nestled in it's winter nest, but that doesn't mean all things bike have been idle around here.

Oh no no, the mind is busy.

Busy learning Arduino IDE so I can build a new digital LCD to replace the minimal LED warning lights. I want to include not only warning light info but also integrate the sensor input from the factory tach and possibly the temp sender. This would replace my side "pods" and integrate it all together right in front of me. Other ideas include using a photo resistor to control the LCD backlight, and adding a little solar panel to charge the microcontroller's battery pack. This will involve printing a new cluster housing to incorporate this pod, and I'm starting to wonder if the MK2 should replace the Android phone altogether and run a larger LCD and possibly piggy back two Arduino's for MOAR POWAAAAR!!!

However, I should probably still order that custom throttle cable, install the new tires, and get the bike to a dyno so they can fine tune the jetting.

Jetting is still getting fine tuned, 118 mains were better but not good enough for highway speeds so I'll be swapping out to 120s soon.  I got into a pretty car nasty accident at last month, thankfully everyone was ok, but between all that was involved with that, busy with work, and getting a new vehicle, riding/wrenching time hasn't been an option.  Until today, when I managed to drain and pull the carbs to prep for the jet swap.

There's still plenty of riding time left this year, so I may still be able to get it zeroed in and ready for next year.

Stay safe out there.