And now for something completely different...

I've been asked to provide a different prospective for the blog. I am a Harley rider. My ride is a 2013 XL1200X, otherwise known as the Sportster Forty-Eight. It's my first bike and it's a keeper.

A little about the bike. For those who don't know, the 48 is a relatively new model making its debut in 2010. It is based on models that were around in 1948, hence the name. This makes for a unique looking bike that comes in a short light frame. Harley decided to use the 1200cc evo engine which gives it plenty of power. I decided that I wanted more. A stage-one kit, Vance and Hines pipes, and Screaming Eagle tuning map have boosted the power from a nice 55hp to a grin inducing 79hp. All of this is great except for the model 48 gas tank. It looks nice but only holds 2.1 gal so my fuel reserve light went on constantly. I've swapped it for a 3.3 gal but still need to paint it how I want. I changed out all of the lights to LED lights, added a small Memphis Shades cafe fairing, threw out the seat for a Mother Road Customs On The Frame seat, added a USMC EGA derby cover, and a miniature Burly Brand sissy bar to carry any little tidbits I pickup while out riding. All together it makes for a pretty nice ride.

And now a little about me. I've always wanted a Harley. Never really narrowed down which one I wanted but I would always gravitate to the older WWII style hard tails. As a grew older, other family members would go on to buy bikes but I still held out. I wanted my first bike to be a Harley. When the Model Forty-Eight came out, I said "This is it." I proceeded to research it over the next several years and find all of the different websites that sold accessories or upgrades for this model. Knowing which Harley I was finally going to own simplified matters for me. I signed up for an ABATE course in 2013 (I highly recommend everyone take the course regardless if they've been riding for years or are just starting like I was.)

I finally decided to pull the trigger last year when I went in to look at the 2014 models. They hadn't come in yet and the dealership had this last 2013 already setup with several of the options I was going to do to it anyways. It became mine that day and i've been riding it since. 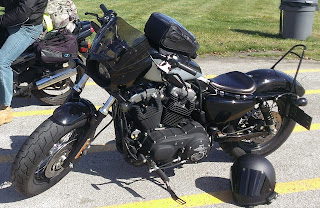 I will be writing about my experiences as a 1.5 year rider. My expectations and reality have not always matched up but I am always learning and pushing myself on this bike. You will hear what a new rider expects from his gear and about how much those expectations are well founded or just a figment of an eager imagination. Regardless, this will be a fun journey.

Stay tuned for my first review of some sissy bar luggage.

As I mentioned in the previous post, I recently took a nice 5 day motorcycle trip.  The temps ranged from the low 40s to the high 70s.  When the mercury dropped or the wind was cold, I needed an additional layer without restricting my arms, so I added the Breeze Blocker by Pilot Motosport. 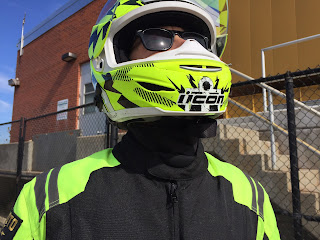 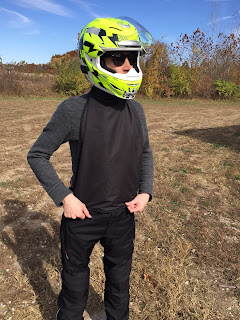 The Breeze Blocker has a REISSA  breathable waterproof layer sandwiched between a windproof Pilotex 330D front and a insulating fleece back.  The combo worked out great!  The collar tightened down snug, without feeling like I was being choked.  It came up high enough that I didn't need to add a neck gaiter.  By keeping my arms free from another layer, it kept my movement unrestricted and left dead air for insulation. 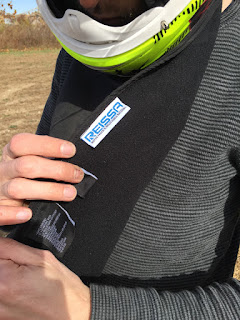 The windproof and fleece layers kept me warm while the breathable layer kept me from getting soggy.  It rolls up and packs well, easy to toss in your tank bag. If you're a cold weather rider or if you wear mesh gear and want to keep your torso warm on frosty mornings, this would be a good option.  For $35, it's a good investment in your riding comfort. 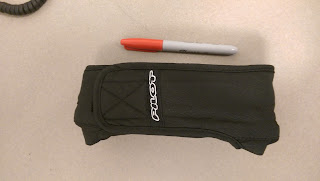 The Breeze Blocker was generously provided by Pilot MotoSport. for our review.
Posted by red at 7:00 AM No comments: