I hit the range on 1/2 with a friend and his father. My arsenal is still tiny but I did get to finally put some rounds through the Charter Arms Explorer II pistol. Until I can do some tinkering, it's a fancy single shot. There are a few good write-ups on how to deal with the poor feed design. The most popular and most effective seems to be shimming the bottom outside edge of the trigger guard. This pushes the poor excuse for feed lips into a better position (since they're built into the mags). 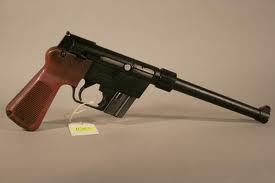 From an accuracy standpoint, it points and shoots pretty well for a cheap gun. Without a rear sight (missing when I bought it) I made an acceptable group from 7 yards. I think with the feed issue fixed and a complete rear sight, it could definitely be a good, albeit bulky but light, backpacking gun. Since it cost me a whopping $45, I wouldn't be too heartbroken if it got damaged.

Come tax time, I'm going shopping for either a poly snub nose or a baby 9mm. Right now, I'm sold on the Kel-Tec PF9. I like their products, neither one of my P11s ever had an issue but they do come from the factory a bit rough around the edges.
Posted by red at 1:39 PM 4 comments: