This past Friday I had the day off and after a bit of house work I decided to take a trip to Anderson Indiana on the motorcycle.With no particular destination in mind, I took to the back roads.

After some gentle curves and picturesque views, I was dumped out into downtown Anderson. I planned on grabbing a bite to eat and then ride around a bit checking out the city. Much of the area is still recovering from the recent rain which has caused many floods throughout Indiana.

I hadn't looked at a map before coming to Anderson so I had little sense of where I was in the city. After a bit of cruising around the streets, I decided to use the GPS to find a local diner or cafe.

The GPS pulled up 2 interesting eateries. The first was Lemon Drop and the second was Gene's Root Beer. The idea of a root beer clinched the decision. I'll hit the Lemon Drop next time.

Diligently following the GPS, I was dumped into a waste land which had a Fallout flair to it. I'm not sure what this area had been in the past, but the whole lot was a mix of concrete, loose gravel, glass and weeds. After a few careful laps I was greeted by a locked gate which signaled that I would need to find another way.

On my new route to Gene's Root Beer, I did pass the Lemon Drop and noticed it had drawn a large lunch crowd. Next time I'm in Anderson I'll stop in for a burger.

Gene's Root Beer, located off of Scatterfield Road, had drawn its own crowd of locals. When I pulled the bike in, I was greeted by a friendly staff member who was happy to see me riding.

Gene's Root Beer had your standard Drive-in fare but what caught my eye was the tenderloin. I've been waiting for the right time to derail my diet, so I ordered a tenderloin sandwich, fries and a Root Beer. Sitting on one of the picnic tables, my order was brought out to me. I chatted with the server, who was anxiously waiting to get her husbands bike out when he recovers from a recent shoulder injury.

It was a good Friday. The weather was warm, the ride was good, and the sandwich was what I had hoped it would be.

After a short jaunt with Red and ShrewsieQ, who were both outfitted with SENA SMH5's, I made the decision to purchase the SENA SMH10.  As lovely has the Seca II sounds roaring down the road at 80mph, there were times when I needed a distraction from all the calming solitude.

The overall consensus from the reviews I read where the that SENA SMH10's speakers were powerful enough to provide clear audio at highways speeds and the SMH10 sync's well with an iPhone via bluetooth. So I gave it shot.


The mating ritual began by mounting the base to the helmet. Due to the SENA SMH10 being able to only mount on the left side of the helmet, this gave me the most grief when trying to mount the unit onto the AFX FX140.

The visor slider on the FX140 is located in the sweet spot for the SMH10. Due to the slider's position and the visor mechanism inside the helmet shell, I had to mount the SMH10 farther back than I would like. This mounting location positioned the fixed boom mic on the SMH10 slightly off to the left of my mouth where I would rather it be directly in front.

Before I synced the SMH10 to my phone, I gave it a full charge and updated the firmware via usb.
Though the boom mic was slightly out of place I decided to give the unit a test ride.

Test 1 consisted of me walking around the house playing with the various features of the unit while getting used to the controls. The unit is very easy to turn on, even with heavy gloved hands. A multi function rocker serves as a button and volume control. Just behind the the rocker on the backside of the unit is a button to active various phone features.

Testing the mic, I called various friends whose response where positive about the sound quality.

The sound quality is a bit tinny but loud, very loud. I where foam ear plugs under my helmet and I have no issues hearing the SMH10.

On to the road test. Starting up some low volume tunes. I headed out of neighborhood and made my first on road call. Pressing the phone button on the back of the SMH10 activates iPhone's voice calling feature. The SMH10 successfully made the call however, my music continued to play through the speakers. This issue was taken care of after I restarted my iPhone.

At 60mph I was able to have two successful phone calls. Each person I talked with said that the audio was clear and they were amazed I was speaking to them while riding a motorcycle.

Update
I've put a view rides the SMH10 now and I only have good things to say. The system is easy to use, pairs great with my iPhone, and has excellent battery life. Over the next few weeks I'll test the unit with Audio Memo's  to see if I can generated some decent audio recordings on the road.

On my last ride, while listening to The Pace Podcast, my music was automatically paused for an incoming call. Traveling at about 45 mph, I answered my phone via voice activation. My accountant was on the other end asking "is this a good time to talk." I answered, "its perfect."

a quick trip to Nashville, IN 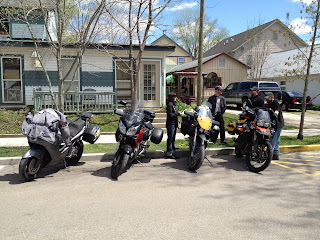 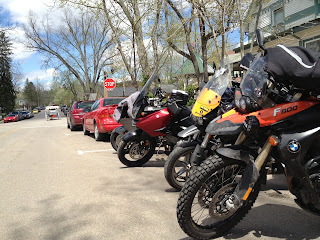 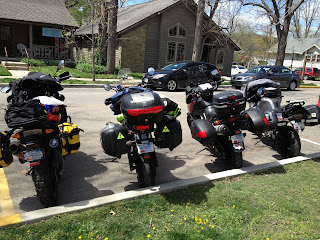 Just some eye candy to get your through Monday.

A friend and fellow Ulysses owner purchased some land in eastern TN near Cumberland Gap.  Eager to put some miles on my bike and take ShrewsieQ on a better trip than our Michigan excursion, we agreed to tag along.

A few days before the trip, my bike started acting up again.  Weird idle, surging, running hot and extremely poor low speed riding.  With some help from KFR, I double checked the static timing and then moved on to TPS zeroing and reset.  On Friday, we loaded up the bike and went out for a test ride.  Unfortunately, the surging and low speed issues were still there.  My stress level was hitting critical mass. 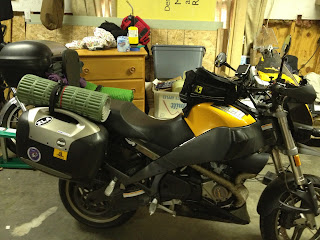 Having replaced all the sensors but the TPS and CPS, I dug back into the fuel system and found this: 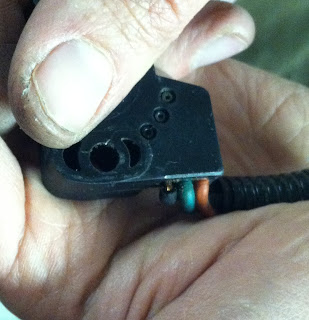 This very well could have been the cause of all my issues.  Knowing that there are many cross compatible parts from domestic cars, I found the correct TPS sensor and started searching the local stores.  The Autozone near my work had one in stock.

During production of the first generation of bikes, Buell switched TPS models.  The Duralast only fits the original style TPS.  My bike was made in Nov, so I wasn't very hopeful that it would match up. However, the motorcycle gods were on my side.  The new sensor worked perfectly! The idle sounds better than it did when I test rode it, the slow speed riding has improved drastically.  So, to Tennessee we went! 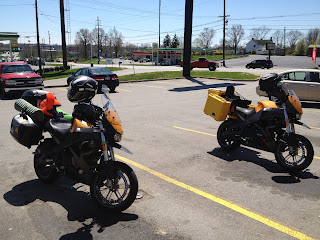 A tale of two Buells at Waffle House.
(Right after lunch, we saw a pimp at a gas station.  He was wearing a matching red suit and hat.)

With daylight running thin and no good flat spots at Rench's land, we stealth camped here. 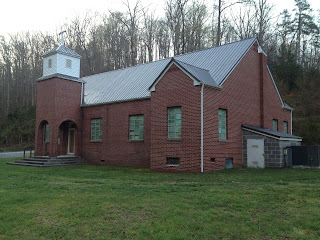 The Church was vacant, so we figured no one would mind if we camped out under the shelter. 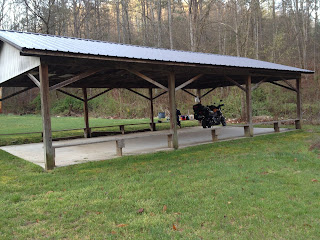 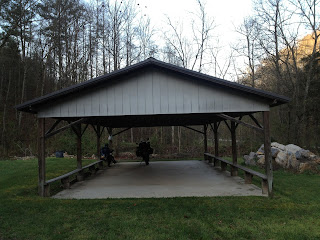 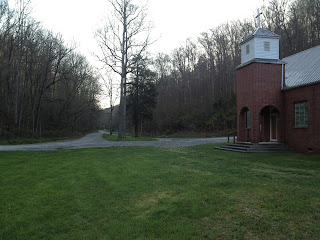 We saw/heard a truck with no tail lights or license plate run up and down this road all night.  Running shine?

Before I left, found a place to stash a spare quart of oil.  Thinking I was clever, I zip tied it
the bottom of the top case rack.  At some point after we left the church, Rench said he could smell burning oil.  As he checked his bike, I decided to check my oil level.  Glad I did because that's when I noticed this: 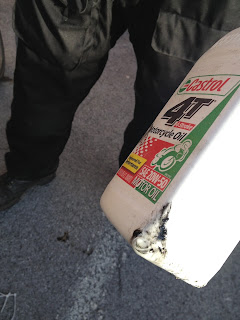 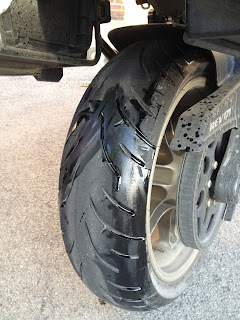 Guess it wasn't a good idea after all. During the ride to get breakfast, my zip tied mess broke free and the quart of oil was rubbing against the rear tire.  It might have been the unavoidable pot holes on the gravel road or it could have been the massive vibrations from the engine finally shaking free the dino-juice.

I made a few laps down a gravel alley to help wear it off before hitting the interstate in search of breakfast. Every right hand curve caused some serious pucker until the 20w50 glaze had worn off. 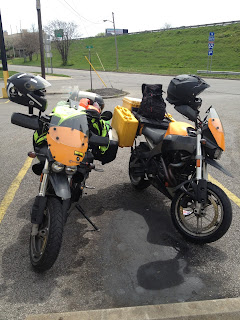 Squeezing into one narrow space at our second Waffle House of the trip.

After lunch, we split up for the remainder of the trip.  Rench had to get home and we were headed to our friends' place in southern IN. 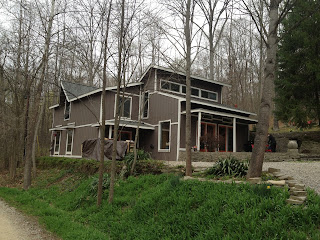 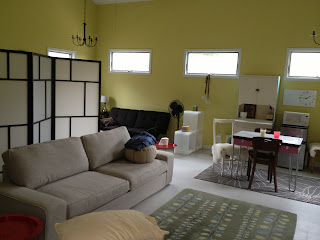 Much better than sleeping under a church shelter. 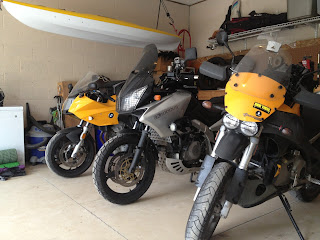 The Buell resting among Ryno's bikes. 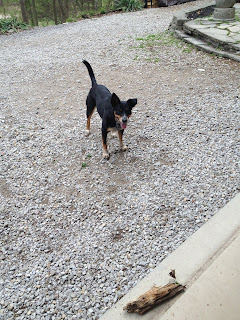 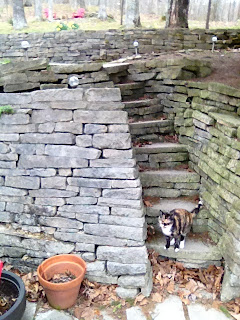 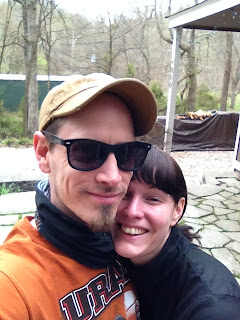 You're handsome author and his lovely wife ShrewsieQ, who handled all the issues of the trip like a champ! 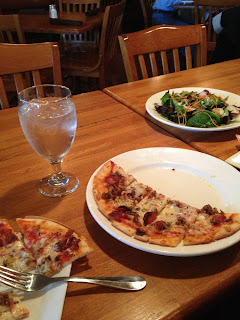 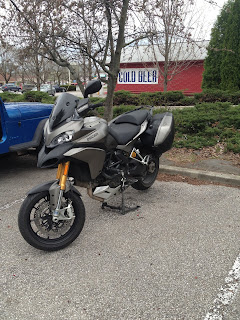 This space reserved for videos as soon as I can edit them.

The trip was great and the Uly ran perfect! We did about 5 miles of gravel roads (now I really want some TKC80s) while going back and forth to Rench's land.  After hitting a grocery store for supplies and getting some seriously weird looks from people, ShrewsieQ said "Even the cows look at us funny here.".  We can mark three states off now, KY, TN and VA.  Total miles: ____________

With a trip to Cumberland Gap, TN coming up, I needed a tank bag for the Ulysses but since it's a tough "tank" to fit, I borrowed Wheels' Wolfman Rainier to see if I like it.  Since there is no mounting kit for the Ulysses and Wheels had modified his, I had to make my own custom straps.

Using the front air box cover screws as mounting points, I used 1" nylon webbing and large eyelets to make mounting straps.  For the rear, I used the front two fan mounting bolts and ran the webbing under my "heat blanket" as anchors.  The bag seems to be pretty secure and I doubt it's going anywhere but as always, a few test rides are in order.

These straps are open ended so, in the future I can add male buckles to fit the stock Wolfman mounts.  I love the pockets in the Rainier but I'm leaning heavily towards the Large Expedition model.

Coming up after the trip, I'll have a ride report and some gear reviews (featuring SENA SMH5 headsets, my Aerostich AD1 pants, DEI Titanium Header Wrap and a whole kit of women's specific gear from ShrewsieQ). 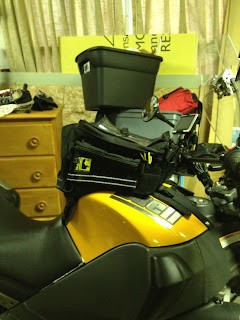 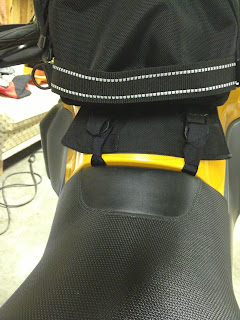 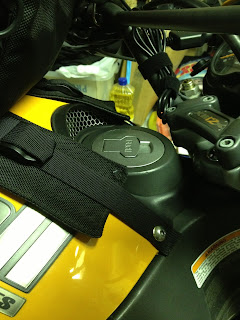 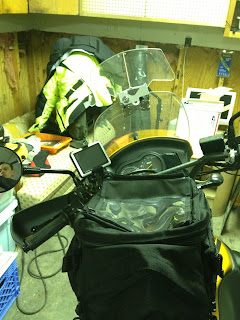 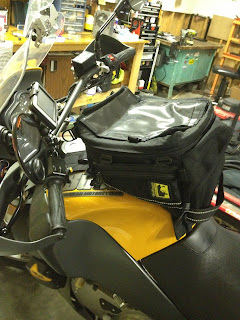