On Saturday, the Mrs and I set out on our first out of state motorcycle trip. We had no real plan, just a destination (in hindsight, not the best idea) and a few days off of work.

We hit the road around 10am, after a few stops, we were on the road. The SECA was loaded down with full luggage and it handled quite well for a neutered 1990s "sport bike". We rode in some good crosswinds and the added weight really helped compared to riding solo. Just shy of South Bend, we stopped in La Paz and got to see the locals in all their glory. Like the girl with caterpillars (insects not the construction equipment) tattooed above her eyebrows, a half dozen very heavy men cram into a single cab truck and lots of neck tattoos.

After a brief rest and a snack under a shady tree in the McDonald's parking lot, we headed north for Michigan. The traffic was generally pretty light and the weather was perfect. We had purchased some new riding gear before the trip and I'm glad we did. The Mrs got a nice Rev'It mesh jacket, TourMaster boots and I got a killer deal on a BMW Boulder jacket. All the gear did great but the surprise was the Boulder, it did great even up to 95 degrees. The lack of a fixed waterproof liner really helps the jacket breath. Anywho, back to the trip.

We arrived at Saugatuck around 5pm and found all the hotels/motels were booked except on that had what appeared to be guys from King of the Hill hanging out front but instead of propane and propane accessories, they preferred stolen lab equipment and boxes of Sudafed for the meth lab.

I found an empty room south in Benton Harbor, there were probably nicer places around but a nasty storm was rolling in and we were running out of time. The GPS decided to take us on lovely trip along the coast, then divert us straight through the ghetto of Benton Harbor. After this fun detour, we found our hotel, got the keys and the sky opened up. The Mrs ran to the room carrying the helmets while I rode the bike through sheets of rain around the building and into a tunnel next to a few big Harley Davidsons.

My lack of planning left us staying in a questionable motel, within walking distance of the 'hood. Hmmm, definitely not a good idea.

The next day, we loaded up the luggage and strapped it all back onto the bike. Within seconds of starting the bike, my oil light comes one. Hmmm... it happens once in a while. Being paranoid since this is our first trip, we head to WalMart for some supplies and a couple quarts of oil just to be safe.

After our breakfast, we check the oil again and the level reads normal. Time to hit the road. 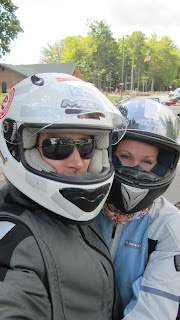 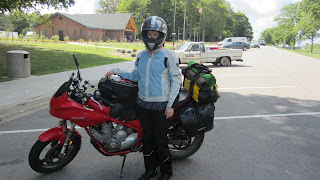 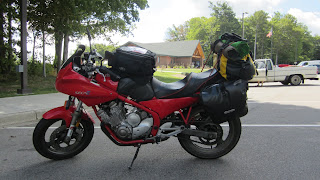 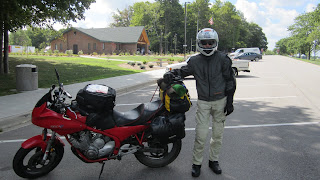 We eventually made it to Holland and to the state park. 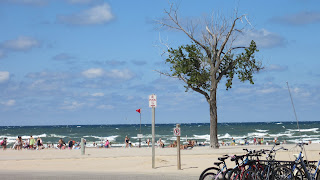 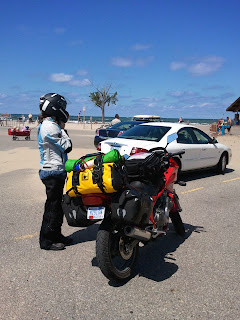 The area was packed with tourists so we decided to get some lunch. The GPS lead us to a couple of places that were closed. We eventually found a cafe, got some food in us and decided to ride around for a bit. After some sight seeing from the bike, we decide instead of getting a hotel again, we'll just head home.

At the last gas stop, I walked into the restroom and immediately thought I was going to be murdered or sodomized due to my purty mouth. Add to this the lady at the register looked at me like I was 6ft of stacked shit when I asked to get $13 in gas. Weird people...

We made it home in one piece. Our butts were slightly sore but the bike did well. I did learn that the distance between the seat and the pegs is a bit short for me. With any luck, I'll be shopping for a bigger bike this fall or next spring. I'm still heavily sold on the R1100GS. Many times during the ride to MI, I thought about how nice it would be to have all that room and crash bars with highway pegs. In time...

All in all it was a great time and the Mrs handled the trip like a trooper and is excited to do it again. =]
Posted by red at 7:33 PM 2 comments: