They called Saturday morning and said the crankcase was ready and the tool was complete.  No more smashing my fingers trying to take the locknut off of the sludge trap.  Now I have a real custom locknut socket, something Honda apparetnly never released to the public.

I won't make be able to pick it up until later this week.  Hopefully I'll get some shop time this weekend and we we can start putting the engine back together.  Then, the all the tuning and settings must be adjusted.  Thankfully, my Honda Manual gives a nice simple step by step walk through for it.

If it's nice enough and I have enough time, I might even finish up those drums that we started last week.  There isn't much left to do once the engine is in and prepped.  I want to break the carbs down again and clean them out a second time.  Still not sure if I have to sync them or not.  Probably should while I'm going through everything else.

I do need to take my pipes into a muffler shop, along with one of my spare heads, so they can bend them back to the proper angle.  I'd rather keep my scrambler pipes than drop the $250 for a 2 into 1 pipe.  Still need to get that thermo-wrap and silicon sealer.

Last Friday, I went through my budget and I'm not sure if I'll be able to make it to Vintage Days.  I'm hoping I can pull OT to get extra cash to fund the trip.

It's freezing in the Dungeon, I mean phone room. I'm sure all there's tons of radiation bombarding my body right now but it's just not enough to keep warm.

Still no word from BnC but I'm calling them right now. *suspense builds* The crankcase is done a guide pin had slide out of place. Now they're waiting on a guy to make the magic tool to remove the sludge trap.

Saturday, we hit the shop and it was beautiful outside! While Funkz pulled his battery box and other bits to drop in his electrolysis thinga-ma-bob, RQ and I pulled my rims. I cleaned up the first one by hand but then realized that I have the magic of power tools! So, I used a soft polishing wheel and let the RedQueen do the front drum. It looks much better than the one I did! Still need to clean them up some more but I ran out of brake cleaner. You can never have too much! After that we ran some errands and had a movie night.

Sunday, we had planned to go bet a new computer desk and a shelf for the ratties. But instead, we spent the day hanging out at Rusted Moon (a backpacking shop that my Mom works for) with Max. Max is the coolest dog on the planet. Unfortunatly, since we live in an apartment, we can't keep him. If we could, then he the RQ and I would have the bestest dog in the world. Yes, I said bestest, get over it. But, tonight we're taking him to a German Shepherd Rescue south of Indianapolis. He has no tags, no chip and doesn't want to go back to wherever he came from. We named him Max because he seems to like it. I'd go into more detail but I'll spare you. 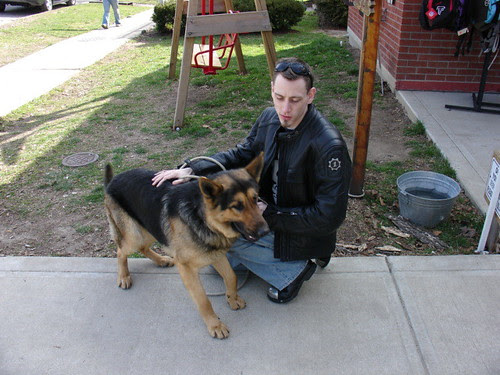 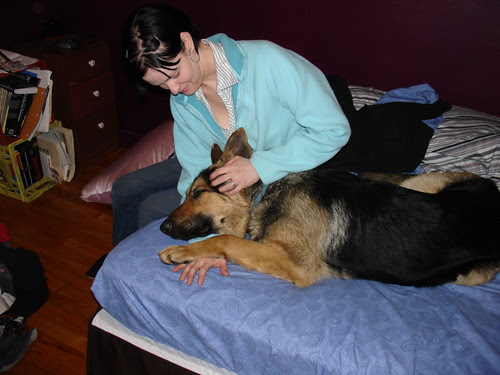 I started my new shift on Weds, 3pm-11pm. At first I was kinda excited about it, the prospect of getting up early and maybe hitting the shop. But the truth of the matter is that I don't like getting up early. Plus, with the RedQueen working 12pm-8pm, we don't get to see each other much except for in the morning. So, I don't want to give up that time to work on my bike. I still have weekends to wrench and there isn't much I can do on my bike right now. I also realized that I've been letting my crappy job get to me and piss on my personal life and attitude. So I'm doing my best to have a better outlook towards my job. I sent off a request for the Machinist program at Ivy Tech. But I won't be able to start school until next year. So, in the mean time, I need to learn to deal with my job and be a good little grunt.

In happier news, I ordered the armor for my jacket. Well, it's actually CE armor from Joe Rocket (4 pieces of elbow armor). It seems to be a bit more protective than the armor that FirstGear recommends. I went with all elbow armor because the shoulder pockets on my jacket are huge and should accept them w/o trimming.

We're trying to start making plans for AMA Vintage Days in Ohio. Trying to figure out if we can borrow my grandpa's truck to use as a chase vehicle. That way, if one our bikes craps out or we find a nice scoot for RQ, then we're set. I need to hit the BMV next week and take my permit test. I'm thinking about signing up for an ABATE class in July. It would be nice to just take the class and have my license w/o all the testing crap at the BMV. Plus, I've heard good things about it from friends and other riders. I know I could use the "formal" education as well. Speaking of education, I'm trying to get in the habit of studying before work and I've actually been pretty successful. Right now, I'm just trying to catch up and refresh things that I've already covered. I need to get this class finished up before the end of the year. Plus, I get more tools once I finish it and that's always good! Granted I have most of what they're going to send me but it never hurts to have spare tools. Plus, I can always sell them.

30 minutes until I leave for work...... it's weird being there without the bosses. I do my fair share of slacking throughout the day but when no one is there to supervise me, it takes the fun out of slacking. So, in turn, I end up getting more work done at night. I'm hoping I won't be on this nightshift crap for more than a few weeks, instead of 4+ like I thought at first. But we'll see.

The wiring harness is hooked up, just waiting on a headlight bucket. BnC hasn't had a chance to work on my crankcase but they might get to it Monday. Spring is almost here and I still have plenty to do on my bike. I'm not moving along as fast as I had hoped. I still need to get armor for my jacket and some armored pants. Once the engine is reassembled here's roughly what I have left:


That should be about it. It's not really all that much to do. I just need to have a couple of long days at the shop and knock it out. I don't want to jinx myself and say it's gonna be done by a certain date. With all the odd ball problems I've run into, I have to take in account of whatever gremlins show up.

I got both of my helmets last night! The Caberg is pretty damn sweet. The XS is a little tight but I wore it for about 20-30min and it wasn't bad. Plus, I think it's gonna break in nicely. If not, I'll just let RedQueen use it and order a Small. The THH helmet is pretty nice too, little wide in the cheeks, not meant for people with narrow faces. 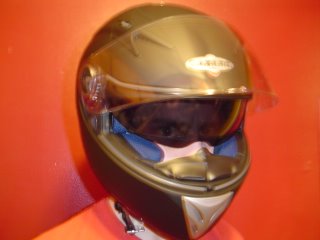 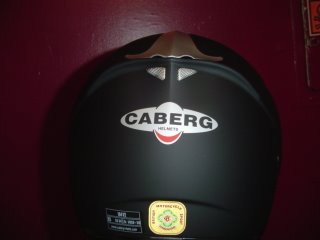 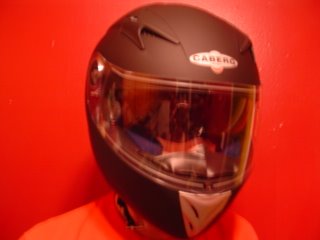 Pretty snazzy! Too bad my damn bike is back in pieces. No word from BnC about the crankcase. So, I think I'm gonna hit the wiring this weekend and clean up my brake drums.

Today, we pulled the engine and isolated the kickstarter problem to the crankcase. We loaded it into the Vdub and took it back to BnC. They'll let me know what happened and the repair/check is free. Plus, they're gonna try to make a 16mm locknut socket for my sludgetrap.
Other than that not much got accomplished on the CL besides grinding and removing a link from the new cam chain. Man, that vise makes life so much easier. If BnC is done by next weekend, we'll be reassembling the engine and starting the fine tuning. If they aren't, then we're gonna load up Stripper Bike and take it down to Cycle Recycle 2 and trade it for credit or cash. I'd be cool with getting a head light bucket, new pipes and maybe some tires and other bits out of it. But we'll see what Rob has to say.
My temporary helmet should be here next week sometime. Still no word on the arrival date for my Caberg. I tried on a small HJC today and it was big on me. So, maybe the XS in the Caberg will fit me fine. If not, I'll let the RedQueen use it and I'll just get another one. Have I mentioned that I hate the UK's Parcel Post? Oh, my Mom will be bringing me back a copy of StreetFighter Magazine from London. Finally get to peek into an issue, can't find it around the Midwest.