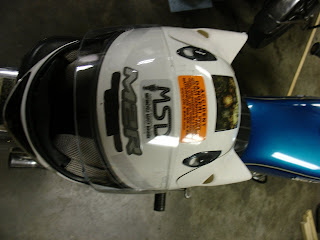 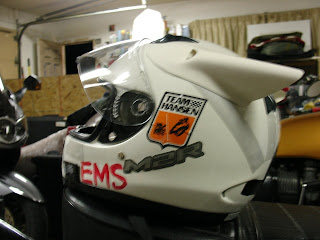 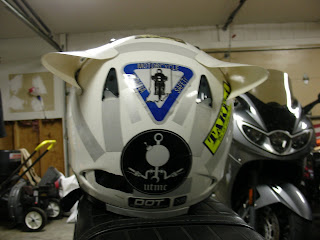 Helmet horns from Japan. I know, I'm a dork. They suck riding in crosswinds...

Finally, the battle with the BMV is over. In a few weeks, I should receive a title for the CB350. No small claims court, no more BS. Now, I need to finish tuning the carbs and all the other bits. Now, when the time comes to sell it, I won't have to pass along the "no title" curse.

Maybe I can scratch up the dough after selling it and find a CB750 or a VFR.

cooking in the sun...

It's a toasty day for riding but a good day nonetheless. Went out on the 750 for a few hours and just farted around town. I'm getting my street legs and plenty of good riding practice. I spent a chunk of Weds afternoon working on slow full stop turns. Funky and I are going to spend some time in one of the big parking lots working on figure 8s and other skills.

Still no news on the 350s title issue but I've become disgruntled about it all. If all else fails, I'll get some cash out of it as a parts bike.

My new knee/shin guards are working well. I prefer armor that is worn on you instead of built in because most riding pants don't fit me well. Plus, they're freaking expensive.
Posted by red at 4:18 PM 2 comments:

Sunday, I borrowed my buddy's CB750 and we went out riding. The Mrs rode on the back of Funky's bike because I'm not comfy with passengers yet. We took some kinda curvy back roads up to Nobletucky and then headed out through Lapel and onto the interstate. I don't have a lot of ride time under my belt and that venture on to I69 was the first time I entered the superslab on two wheels. I survived the moron drivers who I swear were really trying to put us in an early grave.

It was a good day and I learned that my novelty helmet horns from Japan are not good for interstate speed riding. My neck and shoulders are still sore from the wind.

After the day of riding, we came home and prepped dinner. The Mrs made amazing Cornish game hens and Funky and I made veggie kabobs. Tasty!

I had hoped to get the CB350 on the road this year but the BMV has changed their mind each time I go there on what I need to do to replace a lost title. They might be faster but I don't think anyone really knows what is going on. Now, they say I have to go to small claims court and blah blah blah. I'm not dumping a ton of money into this bike for just the title. If things get too difficult, I'll sell it for parts and save my pennies for something else.

Someone didn't clean the seat on the CB750 because I caught the "need a bigger bike bug". Not just for the speed and power, but the extra weight and size helps fight wind and hold lines easier.
Posted by red at 9:50 AM 2 comments: