Cheaper to Keep Her

Over the winter months, I get some serious bike lust.

My eyes start to wander to Craigslist or ADVrider and soon I'm day-dreaming about another Ulysses, a naked DL650 Strom or maybe even something small and stupid fun like a TW200.  Then reality sets in and I remember I'm currently self limiting to one bike right now.  Even though I sold the XJ once before, I don't think I could do it again willingly (if it was a financial emergency, sure).  Plus, after a certain point, you won't be able to get back what you put into a bike.  I don't have much money thrown at the XJ but I have time and a bit of my soul wrapped up in there.  It was my first real bike that wasn't a complete POS and it was the first bike that my wife and I rode together on.  Nostalgia can be priceless. 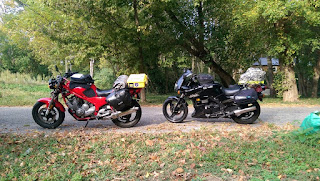 Loaded up for a 5 day trip, last October.

Loving an old, almost outdated when it was new, bike can be a bit disheartening at times, especially if there isn't a good amount of aftermarket or support for that model.  The XJ600 SECA II (Diversion outside the USA) is like that.  Thankfully, XJRider.com is a wealth of knowledge and support.  When a bike like this starts to get long in the tooth, we have to begin scavenging parts off of compatible bikes, like the FZ6R.  Since the tail of my XJ is getting a bit squishy and low, it's time to bring in a donor part.  En-route from eBay is a 2010 FZ6R rear shock which should a great improvement over the stocker. 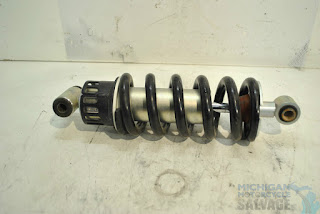 It's a simple swap w/the stock unit, no mods or spacers required.

Once the rear suspension is remedied, it will be time to look at the front fork.  The ride is a bit too harsh for my taste.  This didn't really come to light until my trip last October when I went on a very spirited ride on some crazy back roads.  One particular section almost had whoops like a motocross track.  The front fork was pogo-ing pretty bad and that made me feel really uneasy; and feeling uneasy about how your bike handles is a recipe for disaster on a tight and technical road.

When my wife used to ride with me, I replaced the fork seals and fluid (moving to 15w).  Now that I ride solo, I need to move back down to stock weight.  I've looked into fork swaps but that will require a lot of additional parts (wheel, brake calipers and etc) and will have to be handled at a later date along with a rear wheel swap (move away from the legacy tire size).  These mods will definitely push my invested amount past what the bike could realistically sell for. That's ok, because there is something to be said about creating what you want out of something and in turn, knowing everything about it.

When I start to day-dream about a newer bike, I think about how little I paid for my XJ and how much enjoyment it's given me.  The insurance is down to $75 a year,  with good coverage amounts and it still gets 40 mpg (if don't get too throttle happy).  It might not have fuel injection, high end components or the exact engine characteristics that I prefer but she's a good bike that will take me where ever I want.  In the end, it is cheaper to keep her.
Posted by red at 1:07 PM 1 comment: