Last night we began puppy proofing the apartment. We pick up our German Shepherd pup on June 17th. She's a German/Czech bloodline, full working/protection dogs. I never had a dog when I was a kid, so needless to say I'm pretty stoked! We plan on training her in Schutzhund and maybe Search & Rescue. It's going to be a lot of hard work but well worth it. Be warned, in the future my blog will be mixed with dog info and bikes. On to the moto news....

I ordered my Mikunis last night from Pro-Flo, along with some new jets, needle and a tuning manual. They should be here by Saturday. I have a new front brake cable and fuel filters to install as well. Thanks to Surly for the tips on checking my tach cable. Soon my bike will be sporting a set of these: 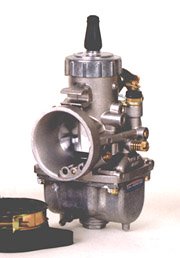 The decision to go back to a larger vehicle (despite gas prices) has been settled. I'm searching for either an older Cherokee, Pathfinder or something similar. I found a 95 Pathfinder today for a good price. Now, I have to convince the bank to give me money for it. Hopefully my credit has improved enough to do so. I'm not anti-SUV as long as they're a reasonable size. Plus, unlike most people, I actually use the 4x4 besides winter. I've had 3 Jeeps, a Samurai and a Pathfinder in the past. All were good trail rigs and fun year round. I'll need to extra space for the pup, once she's grown. We'll be carting her around for training and competitions. Plus it's always good to have a 4x4 incase the Zombie Apocalypse comes.

I'll try to get some pics of the work this weekend and maybe a movie if we get the bike to fire up with the new carbs.
Posted by red at 11:01 AM 1 comment:

After much consideration over the leaking carb issue, I've decided to replace the stock Keihin CV carbs with Mikuni Slides. Sure, I could find a set of CVs, rebuild them and hope they work. But I'd rather upgrade when I replace. Team Hansen hooked me up with their dealer contact. I'm getting 2x 32mm Mikunis with the throttle kit for $230. Not too shabby! I also have a replacement front brake cable and 2 inline fuel filters coming. With any luck, I'll be able to get everything but the carbs installed early next week. Might as well bump up the shipping for the Mikunis and get them before the weekend. I have to get my bike finished up before we get the puppy. Then I have to find a nice balance between riding and working with the pup.

There are other things I need to fix. The tach isn't work but I'm not sure if it's the cable or gauge itself. I have a spare gauge, so I'm hoping that's the problem. I'm still shopping for tires but I gotta save up the cash for those. The present set will be enough to cruise the storage center and Post Office parking lot until I get my skills up to par. Next year, I'd like to take one of the ABATE courses. The training always helps, it discounts your insurance and once you complete the class, you get your endorsment. Too bad you can't bring your own bike. 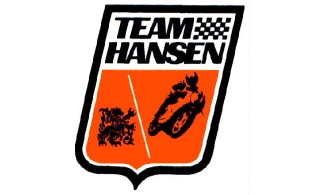 Have a good Memorial Day weekend.
Keep the rubber side down!
Posted by red at 10:56 AM 3 comments:

I hit the shop at 8:30 this morning, after a pit stop for breakfast.  The clutch cable took no time, in the process I noticed it could double as a front brake cable!  After the clutch was adjusted to my satisifaction, I started on the tank.

Apparently, my only choice for a true gas resistant paint is professional quality paint with a clear coat.  The epoxy paint looked better but still didn't take to gas very well.  But it's better than nothing.

With fresh gas in the tank and everything prepped, I wheeled the 450 out and hit the button....

Turns out we had the timing 180 off, how I have no clue.  So, I said screw Dyna's directions and did it on my own.  I had to modify the backing plate as much as I could.  Then had to grind off a corner and edge on botht the lash washer and nut.  But it works and seems to be spot on.  (yeah, I've said that before)

With the dyna adjusted, I tried another test start.  She started up but would only run with the choke and heavy throttle.  So, I tinkered with the fuel screw and it evened out.  Then I noticed the left carb was leaking just like it did before I rebuilt it.  It's still bubbling out of the top cover and around the rod that controls the choke.  So I pulled the carb, adjusted the float and made sure it was nice and clean.  No change.  Then I noticed it was spitting fuel out of the filter.  The right carb is fine but the plug got black prett quick.  So it's running rich, probaby compensating for the shitty left carb.  Since I rebuilt them not too long ago, I'm clueless.  I checked the surfaces and the gaskets, everything looked fine.

With the new clutch bits installed, still no working clutch. I pulled the pack and oiled it up and checked the assembly. Everything looks good. After we struggled with the adjustment and finally got the clutch to release, it wouldn't return. So now we think we're dealing with a stretched cable (it's 30 years old). A new one should arrive in a couple of days.

Sunday, the RedQueen has a babyshower to attend. While she's off showering babies, I'll hopefully be either prepping the bike for test starts or enjoying test rides. Oh, but before all the shower on Sunday.... Southern Culture on the Skids will be here Saturday night! Finally, after missing 2 or 3 shows in a row, I'll get to see SCOTS.

**edit**
I was informed that this is the guys and gals shower, so I'll be hanging with FatChan and all the others on Sunday.
**end edit**

CRC2 to the rescue!

I called Cycle Recycle asking about a replacement drive cover. I guess they got distracted due to some customer being a dick. I sat on the phone for almost 30min but it's no big deal. It was fun listening to Rick tell some douchebag customer to kiss his ass. Man, I love that store.

Anywho, they have the part I need and it will be in the mail soon. I'm thinking about seeing if that clutch mechanism can be modified to give a bit more clearance. I also found some epoxy based appliance spray paint. I have to work on a buddy's KLR next week, just basic stuff. But it's extra $ to go towards CL. I think painting the tank and getting the clutch straightened out are the last things I need to do. Then it will be time for more testing....

I pulled the left peg last night and removed the front sprocket cover only to find this:

Ooops! I guess something was adjusted way out of whack. Unfortunatly, I pitched my spare covers a few weeks ago. So now I have to find a replacement. Anyone have a spare? I've got plenty of parts to trade. On a happier note, the tank turned out great but now I need to repaint it. The paint didn't hold up to the small amount of gas that was spilled on the tank. I don't know much about paint, so I need to research what paint I can use. I prefer my paint out of a rattle can, no need for fancy paint jobs.

I must own this: It's the VW GX3 concept car. If they decide to produce it, the price tag is pretty low for a VW, $17,000. Too bad they didn't incorporate a removable top of some sorts. That way you could drive all year. Still, I want the damn thing!
Posted by red at 10:58 AM No comments:

I added "Site Meter" to my blog and it's interesting to see how people find their way to my blog. Today a person from the DOT was on my site looking for info on gummed up clutches. Pretty cool.

We hit the shop last night and got some serious work done. I dismantled both carbs, cleaned them out and scraped off the old gaskets. Two cans of carb cleaner later, I had freshly rebuilt carbs! Then we mixed up the epoxy goop to seal my gas tank. I never thought silly putty would be part of my tool box. We used it to plug the outlets and seal up the leaking seam. Hopefully there's a nice thick layer of epoxy hardening inside my tank right now.

I'm still shopping around the net for tires. I've found two different bridgestone tires that I'm interested in. I really wanted those Avon Distanzias but they don't make them in the size I need. A local shop suggested I go with the Bridgestone TW series but they seem to be a little to offroad. I'd like to be able to ride in the rain but I don't know if I could trust such a knobby tire. The other set I'm pondering are the S11 Spitfires. They have a nice vintage look but aren't DS tires. I don't plan on doing much trail riding but I'd like to keep the scrambler look.

Tonight we're putting Funkz new cross-drilled rotors on and prepping my bike for the clutch work on Saturday. Hopefully it's just a matter of adjustment.

Pretty interesting analysis of the entire album.
Posted by red at 8:17 AM No comments:

Hopefully we'll have the tank done and carbs rebuilt before Saturday. Maybe we can get a successful start! I can rebuild the carbs at home but I'll have to hit the shop sometime this week to get the clutch issue taken care of. I'm gonna pull both side covers, lube the plates and check all the guts and springs on the left side. But those plates were put in with a thin coating of oil but that was months ago. Why did I put a thin coat when I know it's a wet clutch? Who knows. I think it's just a matter of adjustment or lack there of. The rear brake also needs to be tighter. The front brake cable is way too long but I can deal with it for now.

I'll worry about rinky-dink things like that later. For now it's getting the monster to fire up, idle and make those lovely engine noises. Then it's off to get some new rubber. Still interested in those Distanzas but they might not come in the correct size.