We picked up the newest addition to the family yesterday. His name is Professor Simon, he's a rescued German Shepherd about 9 months old. He's underweight and suffering from Panosteitis (growing pains). In the future, he'll need surgery on his hip to correct moderate hip dysplasia. He and Puppers are getting along great. Until the growing pains go away, we need to keep his activity to a minimum but we can't let him get overweight either.


Sorry for the crappy cellphone pics. We'll get more tonight. 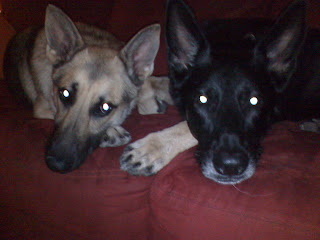 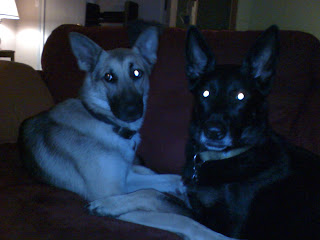 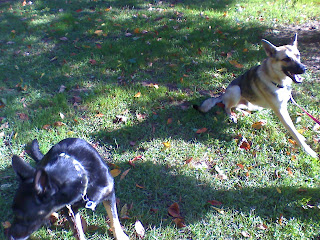 Wherever I go, I hear footsteps:
My brothers on the road, in swamps, in forests,
Swept along in darkness, trembling from cold,
Fugitives from flames, plagues and terrors.

Wherever I stand, I hear rattling:
My brothers in chains, in chambers of the stricken.
They pierce the walls and burst the silence.
Through the generations their echos cry out
In torture camps, in pits of the dead.

Wherever I lie, I hear voices:
My brothers herded to slaughter
Out of burning embers, out of ruins,
Out of cities and villages, altars for burnt offerings.
The groaning in their destruction haunts my nights.

The heavens will descend to mourn for them,
The world and all that is therin will be a monument
on their grave.

Shin Shalom, translated by David Polish taken from the New Mahzor
Posted by red at 5:41 PM No comments:

It's a Yamaha Chappy aka the Crappy. 50cc of 2 stroke fury! It runs but need some work (doesn't everything?). There's some severe redneck repairs that I have to undo but it's got potential. I've always liked 2 strokes, so this is a good little toy to get my feet wet.
Posted by red at 10:41 PM 3 comments: