a dim light on dark road

The SECA II headlight is not the best.
It's early 90's tech just doesn't cut it any more and I'm not sure it did back when it was new. So, the next mod on the list is a set of LED driving lights mounted to the forks. I'll probably go with something cheap in case they get destroyed or the project doesn't work out like I had hoped. The current plan is to use the mounting points currently occupied by the reflectors. If I can find a flat bar type LED light, that would look the best.

In the meantime, my GPS mounts should be here today. (edit: According to UPS, the parts are sitting at my front door!). I went with a RAM mount for the Garmin Quest I was given. It's old tech but it's free tech! I already have our August destination plugged in and ready to navigate. Not that it's going to be a confusing trip but if you have the toys, might as well use 'em. 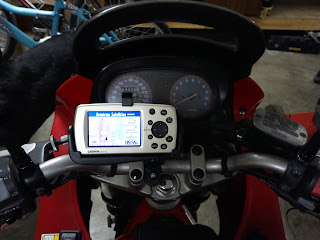 With all these mods to the SECA II, I the stock graphics are going to be removed and replaced with something more appropriate. Maybe a reflective XJ600 II Adventure sticker set? By the time I'm done with this bike, it's going to be a weird hybrid and probably the only SECA like it.

I'm planning a bike trip for my wife's birthday in August. The destination is super secret but the trip is not. She started riding with me this summer, at her own request. I never made her ride with me, nor will I ever tell her to get her own bike. Some people just aren't cut out for certain activities. I prefer to never have to jump out of a perfectly good aeroplane, while others would never swing a leg over a motorcycle. To each their own.


What was I talking about? Oh yeah, the trip. So, her first ride with me was to a vintage bike show about 45 minutes north of our house. The ride home was stretched out to about an hour and a half. She did well as a passenger, no sudden position changes or unnecessary movements. We've been out a handful of times since then and it's always a good time. Granted, it would be better on a bike with more oomph but you make do with what you have.


So the destination is about 5 or 6 hours away, depending on where we stop. I don't have an exact target, more of a general area. It's going to be hot so we need to invest in mesh gear. We grabbed a pair of used Joe Rocket mesh pants from ebay that fit both of us. I tested them yesterday commuting to work and they're awesome. I don't ever want another pair of riding pants that don't have at least 3/4 zippers up the legs. In addition to the JR pants, I got a pair of BMW summer paints from the Flea Market on ADVrider. They're khaki and fit well but the armor sits a bit too low. Granted, it's not BMW armor so the fit in the pockets isn't quite right. I haven't tested them out yet, I was too enthralled with the mesh. We'll see how they are when we go out with Wheels tomorrow.


We still both need mesh jackets and RedQueen needs some good riding boots that don't have high heels or other stripper accents. Why is so damn hard to find good gear for ladies?
Posted by red at 10:46 AM 1 comment:

Well, last night I met up with an old work buddy (from here on out, referred to as Wheels) who always has awesome bikes. Decked out KLRs, Ducati Monsters and now an F800GS. He has some stability issues so the F8 has been dropped about 2 inches and is sporting softer springs front and back. I'm a long legged guy and the stock F800GS is a bit high for me. With the mods to his seat and suspension, it's about the same seat height as my bike but since the seat is so narrow, it felt shorter. I think the short seat would drop the stock height to about perfect for me.

I don't normally ask to ride other's bikes but he offered and I couldn't refuse.

I swung a leg over, fired it up and off I went. Instantly I'm thinking, "Holy crap, the engine is so damn responsive right off the bat. Smooth power, pretty torquey too.". Then, I goosed it a bit too much from a stop and the front end popped up. Oooooh! A smile is instantly plastered on my face from ear to ear. I didn't go too far but I got enough of a taste to know I want more. It honestly felt like I think a motorcycle should. I've sat on V Stroms, Versys, Sprint STs and a lot of other bikes but none felt like I wanted them to until the F800GS. Hell, I sat on the F800ST and didn't like it that much.

I tore through the back road behind the shopping center and out onto a public street and opened it up for a few blocks (didn't want to press my luck). Man, that's a damn sweet exhaust tone. I pulled back into the parking lot grinning like a mad man beneath my helmet.

Had the RedQueen sit on the back to see how the ergonomics were for two-up and she approves. The pegs are much lower and her legs are at a more comfortable angle than on my SECA II.

Hopefully next year, I can start shopping around for a used one. I know the F650 is built more for what I would use it for (commuting, general purpose, riding two-up and light touring) but I know if I bought it instead, I would just lust for the gnarly dual sport function of the 800. Plus, I would have to do some dual sport to keep it happy.

draining out the dino juice

I picked up the $30 paddock stand from Harbor Freight and it was worth every penny. Now, if I can figure out a way to put it on the stand all by my lonesome, I'll love it even more. 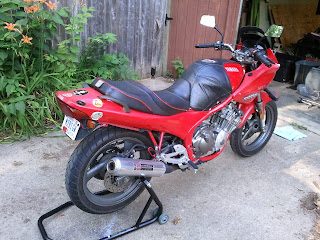 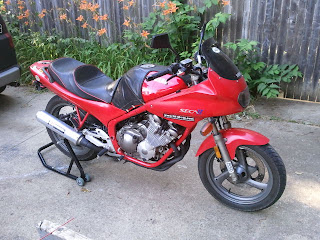 I think I might be spending too much time on the UK bike sites. I've noticed u's slipping into words where they don't belong. Colour, harbour, etc. But I can't help it, it's like a completely different universe of motorbike goodness. Don't forget Monday is Ride To Work Day!
Posted by red at 3:09 PM 2 comments:

a bit heavier on the right side

If you keep looking to your right, a little farther, keep going, there you go, you'll notice a few new links. Lazy Motorbike is a cool Scandinavian / Euro site with tons of great tips and cool pictures. You'll get to see all kinds of cool scoots we don't get here in the states. Tilted Horizons has some cool posts from Doug in Delaware. Sound Rider is a kick ass site for the Pacific Northwet (huh huh huh). Maybe if the Midwest had more twisty roads and better scenery, we could have a cool page like that too. I also added CycleXchange, they have the craziest webpage and it's packed full-o-parts for CB750 SOHCs. Ken (from CycleX) is the wizard that built the CB970 engine we stuffed into Funky's land speed racer. If you haven't checked out JapanBash, get over there and start checking out awesome ride reports from the land that brought us so many cool bikes.

I learned a valuable lesson about gear maintenance. I have owned my helmets for about 3 or 4 years, never once have I washed the liners. Well, after sweating in them both recently, I have the forehead of a greasy teenager. Pulled the liners from both, tossed 'em in the washer on gentle, then into the dryer on low. The manufactures warned against doing both of those things but I'm like to roll the dice and take my chance. I also pull the tags of my mattresses. I'm a rebel Dotty. After some swearing and tetris like moves, I got them both back into the helmets. Now, they fit like new and the clean liners make the cheek pads look terrible. Should have washed those too huh? So, wash your lid.
Posted by red at 7:43 PM 2 comments: