Took the Ulysses out to meet some of the TA Moto guys for breakfast at the Historic Steer In Diner on Saturday. The ride was chilly but the heated grips did well on low along with the hand guards.

The seat height on the Buell has me on the balls of my feet while standing vs the SECA which I could flat foot while sitting. So, it's taking some getting used to. Admittedly, I had two close calls where I almost dropped the Uly. One during a slow speed u-turn and the other in stopped traffic because I stalled the bike. Ugh. At least I saved it both times. Time to break myself of the two-foot down habit.

I mentioned a few posts ago, that the dealership filled my bike with 87 octane before I took it home. The manual calls for 91. So, on my ride home the bike didn't run as well. However, I added 2oz of octane booster and then filled up the tank with 93 octane. This helped the low speed stumble. I still plan on doing a TPS reset just to be safe.

The Ulysses, well most of the XB bikes are prone to pulsing front brakes. Some are warped rotors, some are deposits from the brake pads and others are from the mounting hardware getting bound up. The perimeter rotors are kind of spring loaded, so they move instead of the caliper. My bike has a some pulsing and it's tough to tell the cause. I'll take some 220 grit paper to the rotor first, test ride, then check the rest if needed.

Did I mention my bike has built in butt and leg warmers? I bet your's doesn't. Turns out, a big 1203cc air-cooled V-Twin will keep your legs pretty toasty. The previous owner added the comfort kit, which funnels air to the back cylinder and directs heat way from your legs. There is also a heat blanket that goes under the seat to help in the warmer months but my bike doesn't have that.

Before the big snow gets here, I need to do a fluid change and valve job, oh wait, no need, they're hydraulic. =]

Sorry for the lack of pictures. I'll get some up soon.
Posted by red at 8:53 PM 2 comments:

what is hiding in your closet?

I haven't been in the moto world very long but even I have a pile of gear that I don't use. Stuff I bought from eBay that didn't fit, styles I no longer like or things I bought and just never wear for some reason. Whatever the reason, it piles up and wastes money. I've given some of it away to other new riders who needed the gear but couldn't afford it. What about the rest?

Enter Turn 2 Exchange, a brilliant idea from some riders in Portland, OR. They will sell your old gear for a % of selling price. A good way to get people protected on the cheap, well, at least cheaper.

I don't know how to make that picture a hotlink, so use the text link.
Posted by red at 2:55 PM 4 comments:

It's the weirdest thing.


This was in my garage when I woke up this morning. 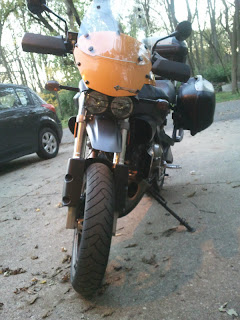 Sometimes you're set on one path and life steers you towards another.

I was set on a KLR when my riding buddy Rino sent me a craigslist ad for the Uly. For $3k w/full hardbags and the comfort kit, I couldn't pass it up, even if it has 67k miles.
Runs great, rides smooth, shakes like mad at idle and has ridiculous amounts of torque. It will run better after an oil change and I flush out the shitty 87 octane the dealership filled it with before I left.

I've been eyeing some of the less expensive "adventure" or "dual sport" style helmets lately. I've seen the ones from Shoei, Arai and AGV but they're all outta my price range. Thankfully companies like Fulmer, AFX and others have caught onto the adv craze and started producing their own style.

The first dual sport helmet I saw was the Simpson GS3-MX and it got terrible reviews. So, I burned that style into my brain and waited. Now, the market has sub $300 dual sport helmets and it's time for me to retire my M2R lid.

I don't know much about Bilt products but some of their stuff is pretty lame. However, I do like their "Adventure" helmet. I have a thing for white helmets, maybe because they're like a blank canvas and I can sticker them up. Maybe it's some weird residual Star Wars speederbike lust. 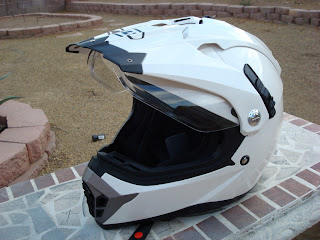 Anywho, for a $100 I think it's a good risk and I'll probably order one soon. The reviews on ADVrider have been pretty good. After all, you can't expect German engineering at India pricing. Plus, the Bilt has a retractable tinted shield and ever since my Caberg, I've wanted that feature again. The Mrs also needs a new lid and I think we're going to go for AFX Hi-Viz modular.

I finally pulled the trigger on the Bilt Explorer helmet but it we never really hit it off.

Check out the post here: http://7plus8.blogspot.com/2013/05/bilt-adventure-explorer-review-return.html
Posted by red at 11:31 AM 5 comments:

bike drooling on a budget.

There have been some financial upsets at the S3 Compound lately. Our shack has needed a new roof for a while now and we can't put it off any longer. (Stay with me, I promise there is motorcycle content ahead.) Our little place was built just after the Great Depression and that definitely reflects in the build quality. The roof has a pretty obvious sag in the ridge line and short of reframing, it's going to stay that way. At some point, you have to let an old house be an old house. We've looked into having the roof redone (about $5k for shingles and $9k for metal) and if we're gonna throw down the scratch for a new roof, I don't want shingles. Our shack is surrounded by trees of all sorts and metal is the only way to go.

Originally, when I moved up to my new position at work, I was going to go bike shopping in celebration. Responsibilities have won over fun, so that's going towards our metal roof. Instead of paying $9k to have someone tear off the asphalt shingles and replace them with metal panels, we're going to tackle it ourselves with a little (ok, a lot) of help from our friends. I'd rather sweat and swear than go $6k deeper into debt.

Finally, we get to the moto content. This changes my outlook on my motorcycle shopping options. I had dreams of rolling an F800GS into garage using BMW's tempting 3asy payment program. Well, I thought about it and thought about it and dreamed of that new bike. Then, I did the math. No thanks. You can keep your brand new blue kool-aid. Instead of getting hyped up about fuel injection, blue/white roundels and high tech 21st century materials, I'm going backwards. Single cylinder, single carb and simple tech. Something easy and cheap to maintain. Something that has a plethora of used parts and information on the web. Something that has stood up to the test of time.

That's right. I'm shopping for KLR 650s. It's time to admit, I'm cheap, well, not just cheap, I'm also generally broke. Not poor mind you, that is a state of mind. It's got enough umph to haul the Mrs and I around plus some gear. I can always add a larger bike for long haul two-ups later. Something like the R1100GS or a Wee Strom.

I admit, the new 2013 is growing on me. But no more financing until something is paid off. (At least that's what the adult inside of me says.)

We gave my bike a SeaFoam treatment directly into the cylinders, a bit in the gas and some in the oil. After cleaning the cylinders, it seems to have more umph! and overall smoother acceleration. Peaking into the crankcase after doing the SeaFoam and oil change, it looks spotless and shifts much smoother than before. Overall, it was well worth the $9.
Posted by red at 9:42 AM 3 comments: